This is Kit Conway from the band Stello. This is the first time I'm writing to you all for a crazy long time.

The reason you haven't heard from me in so long is because because we've been holed up making a ton of music. I wanted to share some of what we have in store for 2020, but it's a little overwhelming so it's gonna take a minute. There are three projects in the works, and I'm going to explain them all, starting with the biggest announcement.

After years of singles and the triplet project, we're releasing our first full length LP. It's hands-down the most ambitious project I've ever taken on, and it feels like a culmination of all our musical endeavors contained in ten tracks. We're in the process of getting final mixes set and then we have to master it, so we're not quite ready for a release date. But it's happening. I'll share the full story of that record soon, and if you come to our shows in the immediate future, you'll hear some of those new tracks.

But in addition to the album, there are two other things in the works:

Over the course of compiling songs for the record, there were three songs in particular that we loved but didn't make sense in the flow of the full project. However, they all came from the same mentality: "Stello makes a pop song." So, we decided to put them out together for a fourth and final triplet - call it a bonus triplet. I've always loved pop songcraft, and this compiles our strongest attempts at whatever a Stello radio record might sound like.

So anyway, that alone is more than a dozen new songs coming out. in 2020. But there's one more thing happening.

For years now I've been living with one of the most talented songwriters I've ever met. And behind the scenes, we've been helping each other with our music for a long time. If you don't know him his name is Scott James, and if you haven't heard his music, you should click here. Stello and Scott have only ever officially put one track out together (Versions), but this year we're going to be releasing a collection of songs written over the course of our cohabitation.

What has me so excited for this is how these songs represent something of a return-to-form as a songwriter. Most of Stello's music is written in the recording space, where the composing happens directly alongside the sonic production and recording. But Scott and I made these songs with a traditional approach: seated together in our living room with an acoustic guitar and a note pad. And I think that method carries through in the feeling of the songs.

PS - with all this new music, we figured it was time to do things like update the logo and look, so that's coming too.

PSS - if you've signed up on one of the Stello Tour pages but haven't seen us yet, we didn't forget about you! The response was huge - we're still working on it - keep an eye out :) 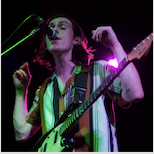 Lead singer and guitarist in Stello. We make music for nighthawks at the diner and quiet walks in the city. Text GOODNIGHT to (917) 512-4392 for new music, upcoming shows and just to be our friend.

Please check your e-mail for a link to activate your account.